Gas flaring, routinely carried out by companies producing oil in Nigeria, poses a significant hazard to the health of those exposed to it, especially children. 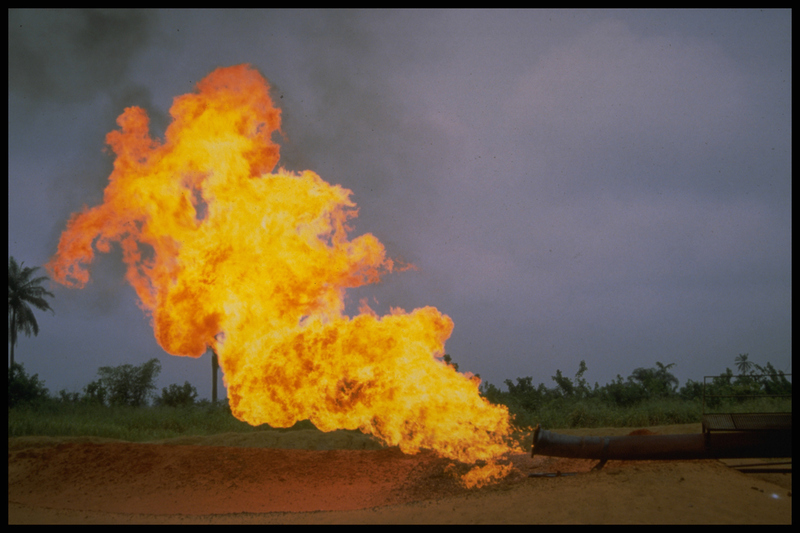 RIVERS STATE, NIGER DELTA — Nigerian mother-of-four and shopkeeper Barineka Eka lives in the town of Akpajo-Eleme, which is 20 minutes’ drive from the Port Harcourt refinery, one of the oldest and biggest government-owned refineries in the West African country, located in the oil-rich Niger Delta. Eka said all her children are always down with coughs, catarrh, and fever due to the production of oil in Nigeria and its associated gas flaring in her community.

Whenever she notices any symptoms, Eka said she buys drugs from the pharmacy to treat her children, who are aged 12, 8, 4 and 6 months old, because she doesn’t have enough money to take them to the hospital for a proper medical check-up.

“My children are always falling sick because of the gas flaring (…) I buy drugs for them for treatment, but it’s not enough. There are health centres around that take care of children who have these symptoms, but they’re not free, and I don’t have money to take my children there,” Eka told Gas Outlook.

Stanley Ojima, who also lives and works in the same community in Rivers State, said the gas affects his family’s breathing because it’s poisonous. Ojima said when the effects of gas flaring hit his children, it gives them catarrh and a cough, and sometimes if they inhale enough, it also makes their chests tight. “When the gas is released, it chokes. It’s bad for the human body,” he said.

Steve Effiong, a businessman with two children of 3 and 2 years old, said they run into their rooms for safety when gas flares are released. He said his children’s noses are runny because of the intense gas flaring, which causes constant cough and fever.

Effiong buys drugs at the pharmacy to treat his children, but he believes the Port Harcourt Refining Company, a subsidiary of the state-run Nigerian National Petroleum Corporation, should pay for their healthcare and treatment for smoke inhalation. Unfortunately, they don’t, he said.

Eka, Ojima and Effiong’s children are among many who have suffered from breathing difficulties and respiratory system issues due to gas flare-ups in the heavily industrialized region of southern Nigeria.

The Port Harcourt oil refinery complex consists of a 60,000 barrels per day (bpd) old refinery that started operations in 1965 and a 150,000-bpd new refinery that came on stream in 1989. It was originally intended to serve as an export refinery.

Nigeria has the largest proven gas reserves in Africa and the ninth largest in the world (as of 2018), with 5,675 billion cubic metres of gas, while the country’s proven oil reserves are 36,972 million barrels of natural gas equivalent.  In addition, Nigeria accounts for 2.7 % of the global proven reserves of gas, according to the Organization of the Petroleum Exporting Countries (OPEC).

In terms of production, Nigeria produced 1.7 trillion cubic feet of natural gas (excluding gas flared or recycled) in 2018. Nigeria is the seventh-largest gas-flaring country globally, according to the World Bank’s 2020 Global Gas Flaring Tracker. The country is surpassed only by Russia, Iraq, Iran, the United States, Algeria and Venezuela.

Gas flaring is the controlled combustion of associated gas, a large volume of which makes up Nigeria’s gas reserves, generated during various processes, including oil and gas recovery, petrochemical process, and landfill gas extraction.

It pollutes the air, heats up the atmosphere and releases greenhouse gases, a World Health Organization (WHO) report said. The process of gas flaring results in the dissemination of greenhouse gases and other air pollutants such as carbon dioxide, methane, ethane, propane, butane, hydrogen sulphide and nitrous oxide.

But gas flaring, routinely carried out by oil exploration companies in Nigeria, also poses a significant hazard to the health of populations exposed to it.

According to a study, around 12 million tons of methane are released into the atmosphere yearly in the Nigerian states of Rivers, Bayelsa, and Delta. About 2 million people live within four kilometers of a gas flare in the Niger Delta, an area long associated with international oil majors including Shell, ExxonMobil and Chevron.

All this leads to adverse outcomes in the health of the people who live and work in communities exposed to gas-flaring activities. These health outcomes range from chronic and recurrent respiratory diseases, increased susceptibility to blood diseases, dermatological conditions, and malignancies, among others.

A World Bank study published earlier this year shows that due to gas flaring, children – particularly those under five years old – have been impacted, especially with coughs, respiratory symptoms, fever and short-term nutritional issues including being underweight.

Nigeria as a whole has steadily reduced its flaring by some 70 percent over the past 15 years. Flaring has declined from over 25 bcm in 2000 to close to 7 bcm in 2020, while oil production has remained essentially flat at around 2 million daily barrels.

However in the Niger Delta, companies have only reduced flaring by 10% since 2007, preferring to pay fines rather than abate gas-flaring activities.

Ugochi Joy, a trader with three children in Akpajo-Eleme, said the situation in the community is beyond bad and lamented that the residents have not been compensated or at least given something to neutralize the effects of the toxic environmental pollution on their health.

Joy said the gas flaring blocked her children’s chests and that they couldn’t even sit outside to take fresh air. “Sometimes it causes the eyes to well up with tears because it has the same effect as tear gas. Tear gas is even better because the smell of this gas is terrible. When you inhale it, it becomes hard to breathe. I don’t know if they release it or not, but once you inhale it, you can feel it instantly affecting your body. You start experiencing discomfort,” she told Gas Outlook.

She said some people in the community still don’t understand the content of what they are inhaling. “There’s cancer everywhere in the world today unlike in the past when it was unheard of. I believe it’s because of some things we inhale that are harmful to our bodies. Also, due to the nature of the country we’re in, we all have to bear our crosses without support from anybody. We have nobody to complain to. Nobody’s concerned because of bad leadership,” she stressed.

“Expatriates are the ones in charge of the company,” she went on. “The Nigerians who work under the company’s leadership refuse to speak up about the environmental and health problems the company has created. In Nigeria, it’s no man’s land. No one wants the responsibility of speaking up and no one is concerned.”

Businessman Kingsley Robert, 40, who resides in Agbonchia, a nearby town, lamented how he and his wife had to rush their two sons to the hospital on several occasions to treat dry cough and breathing difficulties, which he said also cost them a lot of money. He blamed the area’s continuous gas flaring and oil bunkering for more than a decade.

“The medical professionals said the health issues were caused by the gas flaring happening in the community, which has continued to affect many children’s health. For the past few years, the number of reported cases of children suffering from cough, breathing difficulty and other related issues has been on the rise until recently, when it reduced a little bit,” he told Gas Outlook.

“We have made complaints and protested about this whole gas flaring that is affecting people in our community, but the oil companies and government have not taken any concrete steps to resolve the issues amicably. Especially with many illegal refineries around that have continued to refine oil to the detriment of our health, are even making matters worse.”

Lovelyn Blessing, a health worker at the Primary Health Center in Agbonchia, said they get patients coming in with hardness of breathing and that gas flaring had caused many cases of respiratory illnesses, particularly for children.

“I can’t really remember the number (…) but let me just say, in a week, we have like one, two that come for treatment of airborne diseases,” she said.

The chief medical doctor at Agbonchia General Hospital, Dr Davis Samuel, said the inflow of patients with respiratory issues was currently around five a week, but had been as many as 40 a week.

Patients, mostly children, complained of asthma attacks and respiratory infections, he said, adding that one might develop chronic ailments like cancer after close to 10 years of exposure to the chemicals.

“Most of them had no such problem. We didn’t have any such major cases, most of them were asthmatic, and the gas flaring made it worse for them,” he said.

Nigeria is now targeting 2025 to end gas flaring as the government has missed deadlines to end it on several occasions since 1979. Each time Nigeria misses a deadline, it causes harm to those living in the vicinity of the gas flares.

The National Oil Spill Detection and Response Agency (NOSDRA), a government-run satellite tracker, said that 1.8 billion standard cubic feet (scf) per day of gas was flared in the last nine years. Flaring that attracted about $3.6 billion in penalties, little of which were paid.

The volume has generated 95.5 million tonnes of CO2 emissions. The flared gas is valued at $6.3 billion and it could generate 179.9 thousand GWh, according to data from NOSDRA. In 2020 alone, natural gas valued at $1.24 billion was burned by oil companies, one which could generate the annual electricity use of 804 million Nigerian citizens, the tracker shows.

The chairman of the Society of Petroleum Engineers Nigeria Council, Professor Olalekan Olafuyi, has said the federal government will increase gas flaring penalties as it tries to meet its commitment to the United Nations’ net zero goals by 2060, but did not say by how much.

Port Harcourt Refinery Company, NOSDRA and NUPRC, the statutory commission responsible for ensuring compliance with Nigeria’s petroleum laws, regulations and guidelines, were all unavailable for comment when contacted by Gas Outlook.

« Governments lay out plans to cut atmospheric methane
Future of Energy Charter Treaty uncertain »
Manage your preferences
To provide the best experiences, we use technologies like cookies to store and/or access device information. Consenting to these technologies will allow us to process data such as browsing behavior or unique IDs on this site. Not consenting or withdrawing consent, may adversely affect certain features and functions.
ACCEPT DECLINE VIEW PREFERENCES
Manage consent