Gas export terminals are under construction. But they pose health and environmental risks to U.S. Gulf Coast residents. 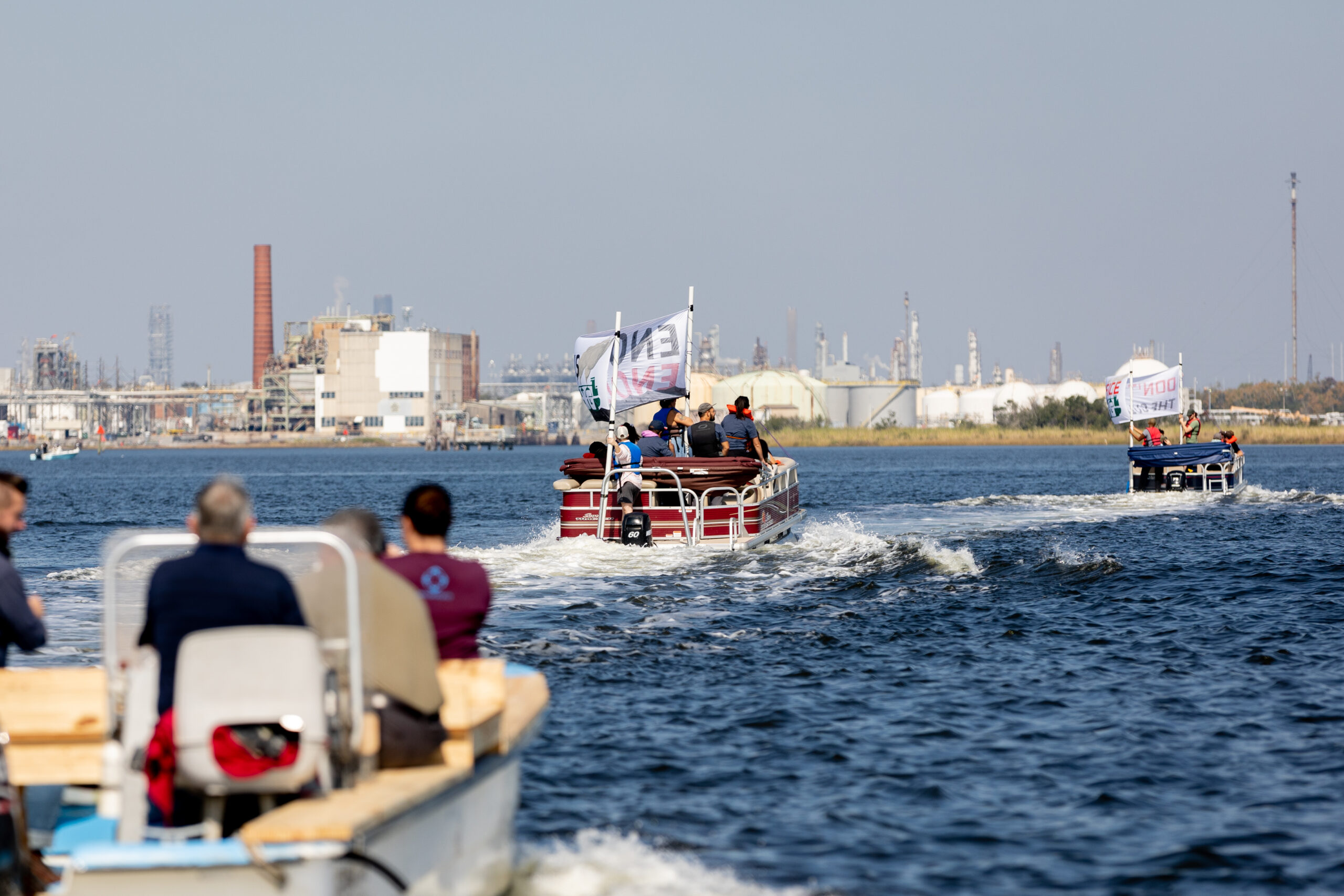 Top gas executives assembled at the Golden Nugget Casino in Lake Charles, Louisiana for a multiday conference in early November to discuss the “need” to build new LNG facilities on the Gulf Coast in light of global energy security concerns. But just outside, a flotilla of fishermen protested the event, demanding a halt to the construction of new gas export terminals.

“We’re here to protect our homes, our livelihoods, and our families,” Travis Dardar, an Indigenous fisherman and shrimper from Cameron, Louisiana who led the flotilla, said in a statement. “Companies like Venture Global build these massive gas export terminals that fill our fishing grounds with concrete, poison the seafood in our waters, and make our homes unlivable – and they expect us to just sit there and take it? Hell no.”

Much of the coastline of Texas and Louisiana is heavily industrialized with petrochemical plants, refineries, ports, pipelines, and crude oil and gas export terminals. The region already has seven LNG export terminals operating, with a handful under construction.

But many more are on the drawing board or are actively seeking permits, and the industry is moving aggressively to try to sign up customers overseas, citing the war in Ukraine as a justification.

“I would rather be able to use our energy resources to support the Europeans, than having to ship our sailors, our Marines and our soldiers there,” Louisiana Senator Bill Cassidy said at the conference.

Edmund Valantis, an official with the Ministry of the Economy of Latvia, attended the event. “These are challenging times and it’s in our common interest to have discussions and expand the LNG market,” he said.

While packed with toxic industry, the coastline is also rich in wildlife, and has supported a vibrant fishing industry, one that is increasingly under pressure from encroaching fossil fuel facilities. The scramble to build new projects threatens the people and ecosystems on the Gulf Coast, according to residents living in the industry’s shadow.

“This is way more catastrophic than any hurricane,” Dardar said, noting that the destruction of wetlands and waterways for new colossal facilities would be irreversible.

Dardar is originally from Isle de Jean Charles, an island in the Gulf of Mexico within Louisiana’s coastal wetlands. With the island rapidly disappearing from erosion and sea level rise, Dardar relocated to southwest Louisiana after taking a voluntary buyout. Now, he lives close to Venture Global’s Calcasieu Pass LNG terminal near Lake Charles.

The Calcasieu Pass facility “just start shipping out in February and already the people who live around that area have reported headaches and respiratory distress that they did not have before,” James Hiatt, a former oil and gas worker and current Gulf Coast organizer with Louisiana Bucket Brigade, a grassroots NGO, told reporters on a November 1 press call.

The facility, the most recent project to come online, has been flaring for nearly 70 percent of the days that it has been operating, according to the Louisiana Bucket Brigade.

“Louisiana should be one of the richest states in the union. Instead, we are one of the poorest,” Hiatt added. “We no longer can allow corporate wealth to be built on our backs, causing illnesses and cancer with no benefits for our communities.”

He also questioned the logic of LNG in light of the war in Ukraine, noting that building new infrastructure will take several years, which means new projects wouldn’t come online until the second half of this decade. But once online, operators of new gas terminals would intend to run them for decades, exacerbating the climate crisis.

“What happens on the Gulf Coast in the next four or five years, this proposed build out of gas export terminals, will dictate what happens in the rest of the world,” Hiatt said. “To continue pumping greenhouse gases into the atmosphere is suicidal and stupid.”

Further southwest, there is one area of the Gulf Coast that has yet to see gargantuan oil and gas storage tanks, pipelines, and export terminals: Brownsville, Texas. Located on the coast at the border with Mexico, the tentacles of the oil and gas industry have not conquered this stretch of coastline.

Instead, dotting the coastline are parks, wetlands, nature preserves, and wildlife refuges, surrounding the delta where the roughly 1,900-mile Rio Grande River empties into the sea. The Laguna Atascosa National Wildlife Refuge, for example, is home to the endangered ocelot, a wild cat with only a few dozen individuals left.

“We don’t have fossil fuel refineries at the Port of Brownsville on the Rio Grande Valley’s coastline. Three quarters of the Texas Gulf Coast is packed with industry already — already has flare stacks, tanker ships, regular explosions — but we don’t have that,” Bekah Hinojosa, senior Gulf Coast campaign representative with the Sierra Club, an environmental NGO, told Gas Outlook. “So, this is the first big wave of fossil fuel industry trying to build out into our community.”

Nearly a half dozen LNG projects were proposed for the Brownsville area, but several of them have been canceled. Now, there are two main projects — Texas LNG and Rio Grande LNG — that are aiming to make final investment decisions before the end of this year and break ground shortly thereafter.

A new report from the Sierra Club documents the multiple risks from the two LNG projects — threats to public health, Indigenous sacred sites, ecosystems, and the climate.

“We are on the front lines of border militarization, we’re already experiencing climate disasters like hurricanes and really bad flooding throughout the year. We are an impoverished community of mostly Brown folks, mostly indigenous people,” Hinojosa said.

Brownsville is home to Elon Musk’s SpaceX rocket launch site, which imposes pollution and explosion risks on nearby communities. Hinojosa scoffed at the idea of placing an LNG terminal in close proximity.

“Putting these two right near each other?” she said, referring to SpaceX and a possible LNG terminal. “A flammable disaster waiting to happen.”

Many Brownsville residents and local governments are fiercely opposed to the proposed projects, but the state government largely rubber stamps any new industrial project, and the federal government in Washington hasn’t served as a check on growth either.

Hinojosa said that realization meant she needed to look overseas for help. She has made connections with activists in Europe to apply pressure on the major European banks that are bankrolling Gulf Coast LNG projects. She teamed up with Irish activists to pressure the Port of Cork to abandon plans for an LNG import terminal. The project was aiming to import gas from Rio Grande LNG in Brownsville. She scored a victory in 2019 when the Port of Cork, under pressure from activists, scrapped the concept.

Rio Grande LNG has contracts with a handful of energy companies, including Engie (France), ExxonMobil (U.S), Shell (UK), and three companies from China. But it does not have enough buyers to move forward with a final investment decision just yet. Texas LNG, on the other hand, does not have buyers under contract, meaning it is likely further off from greenlighting construction.

“Just last week we were in Switzerland hosting a protest outside of a Credit Suisse bank office. We have a petition with about 2,000 signatures and we asked if we could deliver it and they refused,” Hinojosa said.

“We’re yelling at every company and country involved in these facilities to withdraw immediately.”

« Energy prices trigger EU inflation, poor worst hit
Brazil fossil fuels plan under Lula may not transpire »
Manage your preferences
To provide the best experiences, we use technologies like cookies to store and/or access device information. Consenting to these technologies will allow us to process data such as browsing behavior or unique IDs on this site. Not consenting or withdrawing consent, may adversely affect certain features and functions.
ACCEPT DECLINE VIEW PREFERENCES
Manage consent